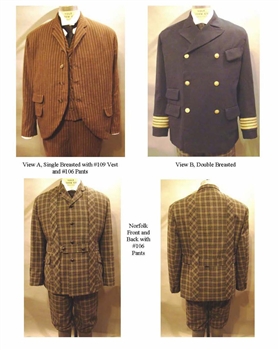 SKU:
$20.00
$20.00
Unavailable
per item
Add to Cart
Single Breasted, Double Breasted, and Norfolk Versions-approximately 1860 to 1900.
View A is a single breasted Sack Jacket with a two piece back, side back seams, a single breasted front with a dart under the arm. As shown it has a welt breast pocket, a flap ticket pocket on the right side and two flap pockets. The front is curved at the bottom and buttons high at the neck. The sleeves are two piece. The jacket is fully lined and has  an internal breast pocket.
View B is different from View A in the front and collar, the rest of the pieces are the same. The front is double breasted with a flap breast pocket and six buttons.
View C is a Norfolk version that is different from View A in several respects. The front is called a "forward lounge" shape because it does not have a curved front at the bottom. It has applied pleats front and back, patch pockets, and a separate belt.
Sizes 34-50, All Sizes Included in Envelope