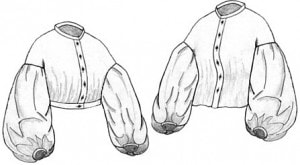 This is a loose fitting blouse, which first appeared in 1861, as a female version of a soldier's uniform worn during the Civil War. Originally, it was of red wool with trimmings across the shoulders, down the center front, around the belt, and at the cuffs. This blouse was gathered into a waistband, and worn over the skirts. By 1862, the term "Garibaldi" began to be used for any loose blouse with bishop sleeves. At this same time, the blouse began to be cut longer and was then tucked into the waistband of the skirt. Prior to 1865, the blouse would be partially hidden from view by a Zuave or Spanish Jacket. After 1865, the blouse could be worn with a simple belt. A white linen version called a "Canezou" appeared, with tucks and lace trimmings covering the front, shoulders, and sleeves.